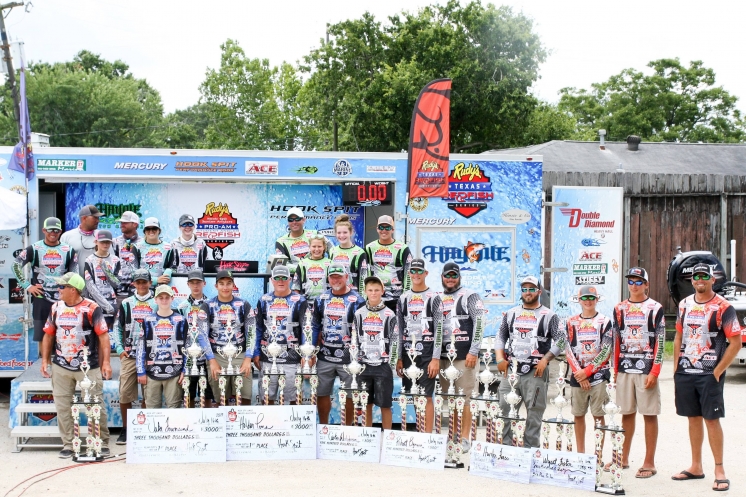 The Rudy's Pro Series anglers join up with HSJAA Junior amateur anglers to compete in the 1st Annual HSJAA Rudy's Redfish Pro-Am.
Hook Spit Junior Anglers Association (HSJAA) has partnered up with the Rudy's Pro Redfish Series to create a Pro-Am Tournament for the student angler members of HSJAA! Throughout the 2017 spring and summer HSJAA has hosted three redfish tournaments in the Galveston Bay Area where students compete for scholarship monies in each event. The field is split between Youth anglers (ages 12 and under) and JHunior Anglers (ages 13 to 17). There are also two bait divisions (open bait and artificial) for each age division. The winners of each bait division in the junior age division qualified to compete in the HSJAA Rudy's Pro-Am Redfish Tourhament! The twelve qualifying students were split into six teams of two and paired with a pro angler team currently fishing with the Rudy's Pro Redfish Series. Each four person team was given matching custom jerseys and set out to catch to slot reds and one oversized red for a total stringer weight to win. The winning team was awarded $3000 and the payout was given to the student angler amateur team to split between them.
The event will be televised mid August on the Pursuit Channel nationwide.
Media: